Home | the round house

The Round House focuses on traditional Native American foods such as bannock (fry bread), Res steak sandwiches (bologna sandwich on commodity bread with commodity cheese), and wild meats. I did create an upscale Res steak sandwich with pancetta, French cheese, rye bread, and pesto which helped round out the meal.

This berry cobbler can be made in one large 9 x 13” pan or in individual ramekin dishes. The individual dishes allow for easier distribution in a book club meeting. 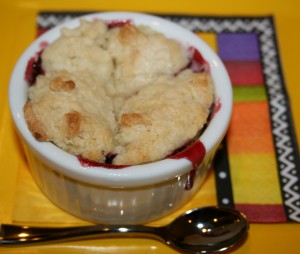 Mix remaining 1/4 cup sugar and 1/2 cup warm water. Pour evenly over dish(es). This sweetens the berries as well as browns the crust.

Bake for 50-55 minutes, until topping is golden brown and fruit is bubbling.

Serve warm as is, or with vanilla ice cream.

Berry cobbler is a sweet but (almost) healthy option for book club. Louise Erdrich’s book, The Round House, requires a  saccharine dessert  to offset its deep, weighty discussion.