Home | Appeasing the Angel of Death

Appeasing the Angel of Death

I am a worrier by nature and by intense decades of practice.

Each night I lay in bed worrying about a potential flood in the basement, a house fire caused by a clogged dryer vent, the abduction of my children from a stranger, and the death of my husband in a plane crash. I worry about bankruptcy, government collapse, the flu virus, a forgotten bill, and a new lump in my breast.

My philosophy on worrying:

If I worry about it, it is less likely to happen.

I sing myself to sleep with a litany of worries which I believe inoculates me from befalling their tragedy. The act of worrying is a preventative measure. 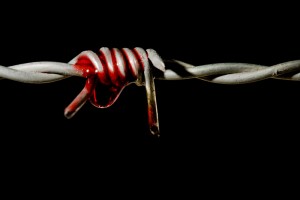 I have never understood the idea of creating characters in a book you are writing and then going easy on them. In classes and critique groups, I often hear from writer’s who like their characters too much to apply the proper force of conflict. They don’t want to inflict damage on the character they love so much (and who often is based on them.)

I do not have this problem.

I torture my characters. Everything they love is forcibly removed. They lose their dreams, their hopes, their dignity, and their purpose. They are buffered by waves of pain, loss, and betrayal. No one is safe. Even secondary characters are mortally wounded.

I do try to write hopeful stories. In the end, they are alive. Battered and bruised, but newly wise and looking toward the future. But I don’t minimize their pain. They have scars from traversing through my stories.

I think the people who can’t torture characters believe they are tempting fate when they do. My philosophy on worrying takes me in the opposite direction.

By inflicting all my worst fears on my literary characters, I am offering them up as a substitute sacrifice. If I sufficiently torment my protagonist, perhaps the angel of death will pass over my house. Their sacrificial blood marks my doorway.

3 thoughts on “Appeasing the Angel of Death”