Barbara Kingsolver’s book, The Poisonwood Bible, is one of my top five favorite books ever. The complexity in her writing is astounding, touching on religious beliefs, socioeconomic class structure, environmental concerns, and human nature. Flight Behavior by Barbara Kingsolver is no different. It is a rich, picturesque novel about poverty, everyday miracles, and lost causes. 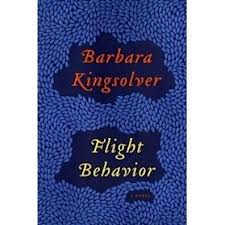 Set in the present day in the rural community of Feathertown, Tennessee, Flight Behavior tells the story of Dellarobia Turnbow, a petite, razor-sharp 29-year-old who nurtured worldly ambitions before becoming pregnant and marrying at seventeen. Now, after more than a decade of tending to small children on a failing farm, oppressed by poverty, isolation and her husband’s antagonistic family, she has mitigated her boredom by surrendering to an obsessive flirtation with a handsome younger man.

In the opening scene, Dellarobia is headed for a secluded mountain cabin to meet this man and initiate what she expects will be a self-destructive affair. But the tryst never happens. Instead, she walks into something on the mountainside she cannot explain or understand: a forested valley filled with silent red fire that appears to her a miracle.

After years lived entirely in the confines of one small house, Dellarobia finds her path suddenly opening out, chapter by chapter, into blunt and confrontational engagement with her family, her church, her town, her continent, and finally the world at large.

Kingsolver writes “Animals behave with purpose, unlike people.” (Page 42) One of the wonderful things about novels is the studied complexity of people and their interactions. In literary novels like Flight Behavior, truth and revelation can often be seen more clearly in fiction.

I will be posting the recipe for Nectarine cupcakes later this week. May words nourish your soul.