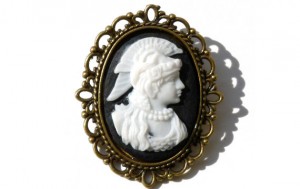 “What is this?” Georgiana had asked, holding the brooch in between her fingers like a dirty rag. “Oh! She’s naked!”

“Wait, wait! You see, she is an Amazon woman. You know, those women who cut off their breasts so they could hunt better.”

Reflexively, Georgiana clutched the hollow in her own chest. She flinched as she touched the new wound—or from the thoughtlessness of my gift. Covered in bandages, you couldn’t see the damage but it was my hope that the sacrifice of a breast would save my wife.

“Amazon women are notoriously strong,” I tried again. “Nothing could hurt them.”

I had been wrong. It wasn’t a significant gift. It wasn’t a talisman to protect my wife. It was a tacky reminder of what she lost. 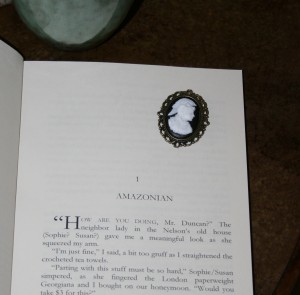 This week’s giveaway is a unique cameo brooch of a warrior woman and a signed copy of Moving Violations.

Amazonian was the winner of a Dayton Daily News contest. As a frequent visitor to garage sales, I am fascinated by other people’s treasures and the stories behind them.

In North Carolina, I worked with the elderly, preserving their stories in photos and journaling. I was always dismayed when the family decided what items were sentimental and important, ignoring the owner’s opinion. Often, the items the family chose were important to them, but seldom to the owner.

Amazonian was my tribute to families who released sentimental items to those who would love them, even if it meant losing them.